[Apologies for the lack of a post on Thursday. Technical difficulties meant I couldn’t work on it in time. The series should resume next week.]

The letter “B” resurfaces yet again in this series on the Saints. Today’s saint hailed originally from France, but did most of his work in England, Saint Birinus:

Birinus (c. 600 – 649), venerated as a saint, was the first Bishop of Dorchester, and the “Apostle to the West Saxons” for his conversion of the Kingdom of Wessex to Christianity.

After Augustine of Canterbury performed initial conversions in England, Birinus, a Frank, came to the kingdoms of Wessex in 634, landing at the port of “Hamwic”, now in the St. Mary’s area of Southampton. During Birinus’s brief time at Hamwic, St. Mary’s Church was founded.

Birinus had been made bishop by Asterius in Genoa, and Pope Honorius I created the commission to convert the West Saxons. In 635, he persuaded the West Saxon king Cynegils to allow him to preach. Cynegils was trying to create an alliance with Oswald of Northumbria, with whom he intended to fight the Mercians. At the final talks between kings, the sticking point was that Oswald, being a Christian, would not ally himself with a heathen. Cynegils then converted and was baptized. He gave Birinus Dorchester-on-Thames for his episcopal see. Birinus’s original commission entailed preaching to parts of Britain where no missionary efforts had reached, and may have included instructions to reach the Mercians. But he ultimately remained in the West Saxon kingdom (Wessex).

The source of this was his wiki, located here. 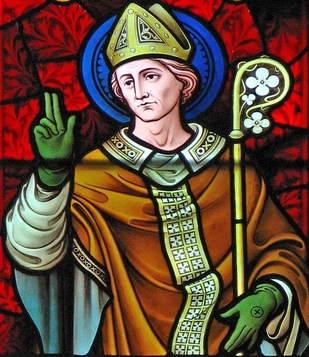 One response to “Saturday Saints- #82”