Today’s post features a saint from the Eastern Church. He lived during a time of political and religious turmoil, when the divide between East and West reached terminal levels. Our saint is Saint Yaropolk:

Yaropolk Izyaslavich (died 1087) was a Knyaz (prince) during the eleventh-century in the Kievan Rus’ kingdom and was the King of Rus (1076–1078). The son of Grand Prince Izyaslav Yaroslavich by a Polish princess named Gertruda, he is visible in papal sources by the early 1070s but largely absent in contemporary Rus sources until his father’s death in 1078. During his father’s exile in the 1070s, Yaropolk can be found acting on his father’s behalf in an attempt to gain the favor of the German emperors and the papal court of Pope Gregory VII. His father returned to Kiev in 1077 and Yaropolk followed.

After his father’s death Yaropolk was appointed Prince of Volhynia and Prince of Turov in 1078 by the new Grand Prince, his uncle Vsevolod. By 1085 Yaropolk had fallen into a state of enmity with the Grand Prince, and by extension the Grand Prince’s son Vladimir Monomakh, forcing him to flee to Poland, his mother’s homeland. He returned in 1086 and made peace with Monomakh but was murdered the same year on a journey to Zvenyhorod. He was remembered in Rus sources as extremely pious and generous to the church and is recognized as a saint in the Eastern Orthodox Church.

More can be learned about him at his wiki, located here. 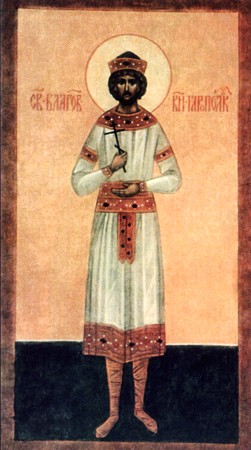 One response to “Saturday Saints- #79”