In the comment section of my latest post Leap of Beta, who makes his home at Staged Reality, left what I thought was an insightful comment. Reading it helped solidify some thoughts that I hadn’t been able to settle enough that I could include them in that post. Given how long it already was, I’ve decided to write a new post to lay them out. I am going to track his comment somewhat through my post, so lets begin with this paragraph:

The problem where semantics come in is that there is a very, VERY big difference between Godly Masculinity and Game, yet Dalrock and Vox lump them together. Heartiste does not. I’ve written before about the difference between temptation vs attraction. Temptation is the heart of Game, attraction is the heart of Christian Masculinity; though I actually would go farther and call it Adoration. My reason for this is that the reactions I’ve seen of women to Christian masculinity is a strong mirroring of the adoration a Christian woman will give to God.

One way of reading Leap’s comment is that Godly Masculinity and Game are two very different things. Here is a visual representation of this: 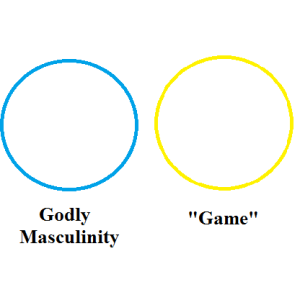 In this model, the two have nothing in common. This is the preferred model of most opponents of Game around the manosphere.

Leap then followed up that paragraph with this sentence:

It should be noted that many, -MANY- of the things game advocates fall in line with those patriarchal teachings.

This provides a different potential visual representation of the two:

Under this model, there is a certain amount of commonality between the two. The graphic itself isn’t exact, the overlap I included (the part in green) was merely to show that there were some areas of compatibility. This model is the one which Christian advocates of Game seem to have adopted.

Much of the debate from my last post centers around which model is correct. If Model 1 is correct, then Christians should have nothing to do with Game. If Model 2 is is correct, then Christians should be trying to determine just where the “green zone” is located. Before trying to resolve this debate, I want to go back to Leap’s comment. The part that I initially overlooked, but has intrigued me since, is this:

I initially dismissed Leap’s thoughts here because Attraction is a critical component of Game, not just Christian Masculinity. Because of this, I didn’t give his ideas on Temptation any real thought. But as I was writing this response, I realized that he was on to something. I don’t think his initial statement was correct for the reason I mentioned above, but it provides the kernel of thought necessary to germinate a full concept. You see, both Attraction and Temptation lie at the heart of Game. Not one or the other. Both reside there, although in different ways (as I will explain shortly). As for Christian or Godly Masculinity, Attraction and Adoration are to be found at its heart. [The concept of Adoration seems fairly similar to my thoughts on Desire, although I don’t think that they are an exact match.]

For Game, Temptation is the second step. The first step is to generate Attraction. Once a woman is attracted, then you can tempt her. Or perhaps a different word is appropriate: seduce. Many Game advocates in fact recommend a three stage model:

(One example is found here.)

To tie this in what what I and Leap have mentioned before, “Step 1” is a combination of the Attraction Phase and the Comfort Phase. Personally, I think that they are an unnecessary attempt to distinguish between the two. Both involve attraction, with the nature of the attraction moving from more appearance or status based to more emotion based over time. Once Attraction is taken care of, then you can move to the Seduction phase, or what Leap deemed Temptation.

As for Godly Masculinity, you start off in a similar way: by building Attraction. Once you have established Attraction, then you can lead things towards Adoration. Unlike the unbridled lust or the lure of the forbidden fruit found in Game’s seduction/temptation, Adoration is based off a God-fearing woman’s acknowledgment of a man’s righteous character and her respect of him for it. Whereas a woman who is tempted with Game merely wants to sleep with the man tempting her, a Godly woman who adores a man wants to follow him, to join herself to him and his mission/cause.

From this perspective we can see where Game and Godly Masculinity are “compatible”: the generation of attraction. However, both take very divergent paths once you have achieved the necessary level of attraction. Although I think that they actually may share an even earlier frame of reference, if you will. By that I mean that “Frame” is something that is a component of both Game and Godly Masculinity at an even more base level than attraction. Perhaps the best way of visualizing this is as a pyramid. Lets start with Game: 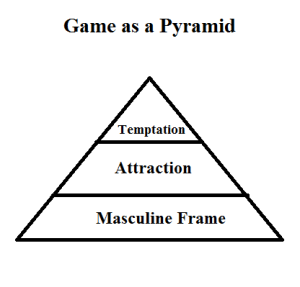 Masculine Frame forms the base of pyramid. Everything starts with that; forming a Dominant Masculine Frame is the first step in the whole process. In fact, it is so elemental it must be established before a man even approaches a woman. After Frame is established a man can approach a woman and begin step two, which is the building of Attraction. After sufficiently building Attraction, a man can then move to the third and final step, Temptation. Moving on to Godly Masculinity, we can see that it looks fairly similar: 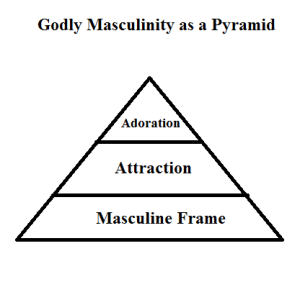 The only obvious differences is the pinnacle of the pyramid. Temptation has been replaced by adoration. However, I think there are probably some base differences (no pun intended) in how Masculine Frame works between the two. Even if there aren’t, these two new models provide us with a better understanding of how Game and Godly Masculinity interact. We can see that the intersection between the two is found in generating attraction, and in some measure in Masculine Frame.

All of which leads to the major question waiting to be resolved:

Is it possible to separate the Attraction aspects of Game from its Temptation aspects?

In other words, are the tools which are designed to generate Attraction so intrinsically linked to Temptation that they cannot be used apart from those purposes? If this is the case, then Great Books For Men and other opponents of Game are correct- it has no place in Christian circles. On the other hand, if the tools to generate Attraction and Temptation are different, then it stands to reason that Christians who wish to advance Godly Masculinity can appropriate the tools to generate Attraction for their own, holier ends. A similar analysis can also be applied to Masculine Frame as well, although I think that it is sufficiently different from the two stages that the same ethical concerns are not implicated.

As a final thought, if one uses Leap’s definitions for Game and Godly Masculinity, or at least his understanding of how they work, then there really isn’t any room for Christian men to “Game their wives”. Temptation has no place in marriage, and since Game inherently involves Temptation, Christians must eschew it. Of course, that just gets us back to the original point of Leap’s comment, which is that much of our struggle here is over semantics. So rather than argue over what is and isn’t game, we can instead direct our efforts to answering the question I raised above.

176 responses to “Godly Masculinity Versus Game”