One of the things that has long irked me about the manosphere has been the tendency to group people into Alphas and Betas (and occasionally other greek letters as well). I have always felt that it was a sloppy system that failed to explain properly the way that women look at men.

In my mind, Alpha and Beta weren’t conditions of men, or categories of men, but attributes that a man could possess. I first visualized this as a matrix (an appropriate metaphor, I should think), where you had Beta attributes on one side, and Alpha attributes on another.

Novaseeker had a similar idea with his List A and List B attributes, and in a discussion on his blog I introduced my own ideas on the subject. He asked me for some details, and I provided them, along with some graphics to go with them. Rather than copy paste his post, read it on his site to understand my thoughts on the subject:

One of my comments to that post expanded my idea somewhat, by noting that a visualization of a graph might be superior to matrix, as it demonstrates that Alpha and Beta aren’t binary. A man isn’t really Alpha Yes or Alpha No. Rather, he has a certain amount of Alpha attributes, and that attribute can be positive or negative. The same applies to Beta attributes.

Before I include a rough graph of that new visualization, I should note that Alpha attributes is a short hand reference to LAMPS. However, given the context, I think I will leave it as Alpha, so it makes more sense to a casual viewer. 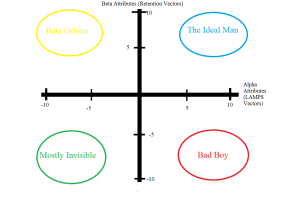 Alpha and Beta Attributes graphed out

This graphic was made by myself, and can only be used with permission. It is not open source.

The goal of a man who wants to maximize his potential should, in my opinion, be to aim towards the top right corner of the graph. That means maximizing both Alpha and Beta attributes. Beta doesn’t get a lot of love in the manosphere, and I think that is a shame, because such attributes do serve a vital purpose. I think my next post will talk about these so called Beta Attributes, which I call Retention vectors.